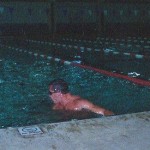 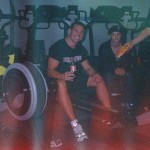 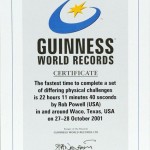 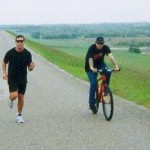 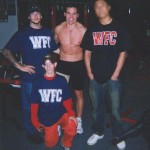 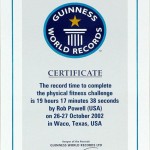 World Record Institutions Internationally recognizes one man as The World Fitness Champion and only World Record Holder.
That man is Rob Powell, and he is the undisputed….
4 Time WFC World Champion
4 Time WFC/Guinness World Record Holder
Over 150 Different Records in Sports, Fitness and Martial Arts
Over 1,000 Wins as an Athlete and Coach

Rob kept shattering his own World Records by two, five and six hours, even after adding a multitude of distances, weights and disciplines to the former World Record. Guinness asked Rob Powell, after his 2001 World Record, to stop increasing the events for the safety of future athletes, and make it a race for time. Guinness then asked Rob to write the rules for this World Record, and they are as follows….

Rob Powell has even created a new sport, The World Fitness Championships, which has been recognized by Guinness World Records, as published by ”Men’s Fitness UK”, March 2004, and ”The Dallas Morning News”, October 30, 2004, even though Rob never applied for recognition. When asked why Rob didn’t apply for Guinness’ recognition, he said, ”Guinness is a fine publication. However, athletics and fitness are not their field of expertise. That’s why the WFC was formed in March of 2000. Guinness allows push-ups/press-ups, weights lifted, certification of equipment, weights, distance and measurements at a much less acceptable level than the WFC allows. We also have the WFC Archives, as an Internationally Recognized Source of World Records”.

Rob also said, “most of these records fall far into the ‘who cares’ category. I did all this to prove the limitations that science puts on mankind were wrong, and to help people with a better workout and training program. I proved it to myself that these records could be shattered and I could do it. No one can ever take that away from me and as far as I’m concerned no one else ever had to know about these records.”

Even though it is true that Guinness at one time recognized British athletes as “club record” holders and calling it a “Guinness world record” allowing untimed breaks for food and rest. Also allowing many changes to the events, allowing for example 20 miles to to be changed to 20 kilometers, far shorting the distance. Also allowing changes to the rules and standards making the competition much easier for their competitors. Even allowing false, uncertified officials, lack of witnesses, absence of certified tests of equipment, and no video taping of the events being performed.

This has all blown up in Guinness and the competitor’s face, having to remove the records from at least two former claimants when unable to provide sufficient proof of their claims. This gives Guinness a black eye in this field since the 2001 and 2002 World Record Standards.

The WFC and other Credible World Record Organizations still use these standards. The original events, rules and standards and records performed by Rob Powell remain the standard for fitness Internationally and Historically. Rob Powell’s World Records is where it all begins and ends. No one else has ever come close to those performances. No one. 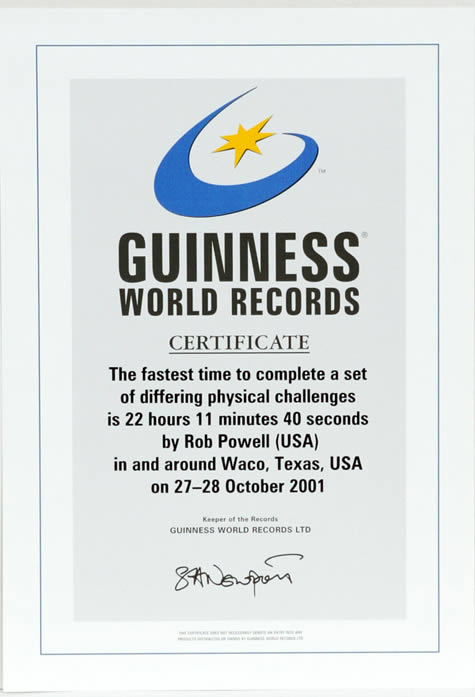 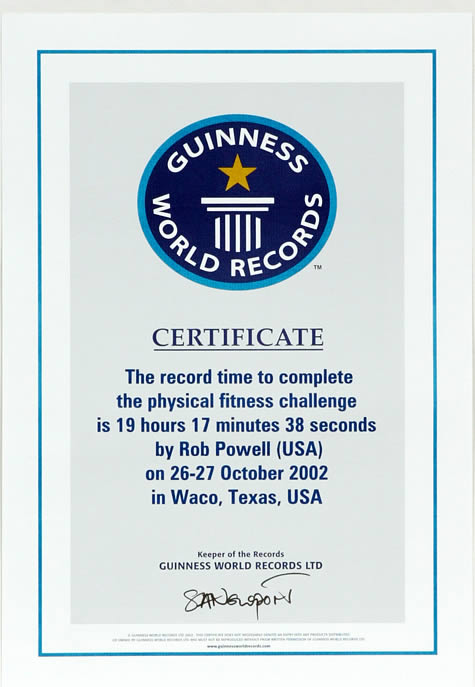